Please help World of Words to help others

What an academic year it has been for non-profit literacy and well-being project World of Words i.e. www.worldofwords.education and it is all down to hard work and extensive fundraising.

During the 2018/19 literacy season WOW took on many challenges and delivered results, including:

-Working with three schools and over several dozen children.

-St. Joseph’s RC Primary School, Gabalfa came on board for a successful term – and, this was WOW partner number 20 and the first school to participate outside of RCT.

-Ton Pentre Juniors and Parc Primary were also partners for the whole year.

-Really beneficial classes were held with Parc Primary kids at Treorchy Library and this led to increased membership of this facility. This outcome benefits the school, library, WOW and most importantly the kids.

-WOW also liaised with a new project and worked with some lads from the Bridgend area who had been expelled from mainstream education.

-WOW has tied up with The Rhondda Housing Association (RHA) to run adult literacy provisions with tenants.

-WOW has also bonded with RHA and Tonypandy Library to form a fortnightly daytime group called Cultural Chapter that introduces guest speakers to talk on a variety of subjects. WOW has also obtained a number of books to give as free gifts to its audience at these events. A trip is on the way with the Cultural Chapter crew to Cardiff Library and other gala occasions are planned.

-WOW has played a role in the Estyn inspection at Ton Pentre Juniors via the submission of an extensive report outlining its work.

-WOW has brought in ITV Wales cameras for the second time in three years to Ton Pentre Juniors in order to be filmed with pupils for the ‘Wales this Week’ programme.

-WOW has arranged regular visits from Ton Pentre Juniors to Treorchy Library and membership has increased among year 5 and 6 kids once again owing to this action.

-WOW has also arranged for several extensive guided tours for schools of the Parc & Dare Theatre in Treorchy.

-WOW put Parc Primary in touch with Keep Wales Tidy and as a result a successful litter pick was held.

-WOW has written stories and rhymes for its children and these have proven to have had an incredibly positive effect on the young throng. There have also been most important strides in the development of youngsters.

-WOW has been involved in ‘The Listening Project’ for BBC Radio 4/Radio Wales airwaves and there are aims to get further coverage.

-WOW has also voluntarily been involved with the Tonypandy Friendship Group and has brought in characters to entertain the members in attendance.

-WOW has plans for a variety of visitors to come in and speak to its partner projects but during this period discussed those people who have already been in are as follows:
-BBC presenter and rugby aficionado Phil Steele*
-Motivational speaker and South African born Grant Adams*+^
-Novelist and PCSO Sarah Phelps*+
-Chiropractor John Roberts*
-Rhondda Tunnel Society Chairman Steve Mackey*
-Sculptor and artist Barry Lewis*
-Magistrate, novelist and poet Lynne Tippett*+
-Photographer and car mechanic Tony Smith*+^
-Carer, baker and poet Dylan Morgan*
-Writer and former teacher Phil Rowlands*
-Radio presenter, well known Asda employee and local personality Alnashir Pabani*
plus, there has also been a journey in from The Cat’s Protection League*

-There have been regular weekly WOW updates in the Rhondda Leader as well as items posted to GTFM Radio, Rhondda Radio and the South Wales Echo.

-WOW has led storytelling sessions at projects such as Welcome to our Woods and the Cambrian Village Trust.

-WOW has volunteered its services in other fields such as both the Strive and Thrive and Hapus Pawb schemes that have helped local folk discover new interests and get themselves active.

-WOW celebrated its 8th birthday on 12 July 2019 and that has meant over 2600 particiapants when adding the children since that date and the preceding juniors on the previous Only Boys Allowed project that begun in January 2009.

-Plenty to record and there is so much more but all in all it is a cause to celebrate!

-WOW has continued to fundraise and will continue to do so to help its own needs and assist the schools in their attempts to retain our services. WOW held a well attended charitable quiz at The Lakeside cafe which brought in capital. There will also be joint bids to continue the adult provisions. and any help with this facet of the business will be gratefully appreciated as WOW aims to get more people involved in its aim to increase confidence and self esteem in our communities while also enhancing skills.

However, World of Words needs funding to continue its work assisting a variety of folk.

For more details go to www.worldofwords.education or email worldofwordswales@gmail.com or call 07981 633361 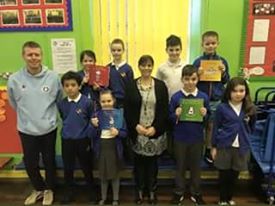